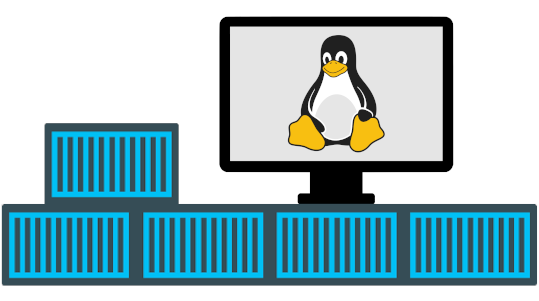 This article describes a way to use Docker containers as lightweight virtual machines suitable for building software. Containerizing build environments makes it possible to build with different Linux distributions and to isolate the build environment from the host system, with only a negligible performance penalty.

Docker containers are not real virtual machines, they are only virtualized on the OS level. This leads to some interesting advantages and disadvantages compared to building with fully virtual machines: (using a tool like Vagrant)

When using Docker it's important to understand what some basic terms mean, so let's start with some basic points here:

Docker images are templates used to create containers. An image can't be run, a container can.

A container is in many ways comparable to a virtual machine instance. It's created from an image with some configuration values and has a life of its own. It has files in a private file system. It can be stopped and started multiple times. It can be attached to with a terminal and operated like a separate system.

A Dockerfile is a recipe for defining a new Docker image. A Dockerfile typically specifies what to add to an existing docker image in order to get the new image.

Why this method isn't using a Dockerfile

Since our goal here it so emulate the experience of a virtual machine that will be manually managed and operated, as opposed to a fully automatic build solution, there is no good reason to define a custom image with a Dockerfile. Basing our container directly on one of the generic Linux distribution images like: ubuntu:20.04 is perfectly adequate.

Most of the container customization and configuration must be scripted anyways.

A note about users in containers

Docker is usually run as root on the host system in order to accomplish the OS level virtualization, and the user inside the container starts out as UID:0, GID:0 (root) as well. This is not as bad as it sounds, because the container can only access mounted volumes and its own files.

Let's build Python3.9.5 inside a Docker container running ubuntu:20.04 as a demonstration:

Change directory to an empty folder and create a couple of scripts:

A couple of things to note here:

In the same folder, make a script called: bootstrap

Generating and setting up the locale environment is necessary to make the container's terminal support international characters and to make for example Python use UTF-8 decoding by default when opening files. Otherwise ASCII would be used as default leading to all sorts of issues.

In the same folder, make one more script named: container_attach

This script is handy in order to restart or reconnect to the container after detaching or stopping it.

Building Python in a container

With these 3 scripts ready, let's make the container:

As the container comes up, and the bootstrap script finishes, the terminal prompt is now a shell inside the container running as root. Install the dependencies for building:

Change to the intended build user:

That should work out of the box. Notice the build artifacts are already available in the mounted dir on the host system.

To exit the container, which will stop it, run: exit or press Ctrl-d

To detach from the container and keep it running, press: Ctrl-p-q

The container will persist until it's deleted: