This post first appeared on the Lars' Electric Endeavors blog at larsee.dk. This is an unedited republication.

Read on to see pictures and a simple analysis of some cheap and popular RF remote controllable power switches available in Denmark and probably the rest of the world also. The danish name for this is “Fjernbetjent stikkontakt”. 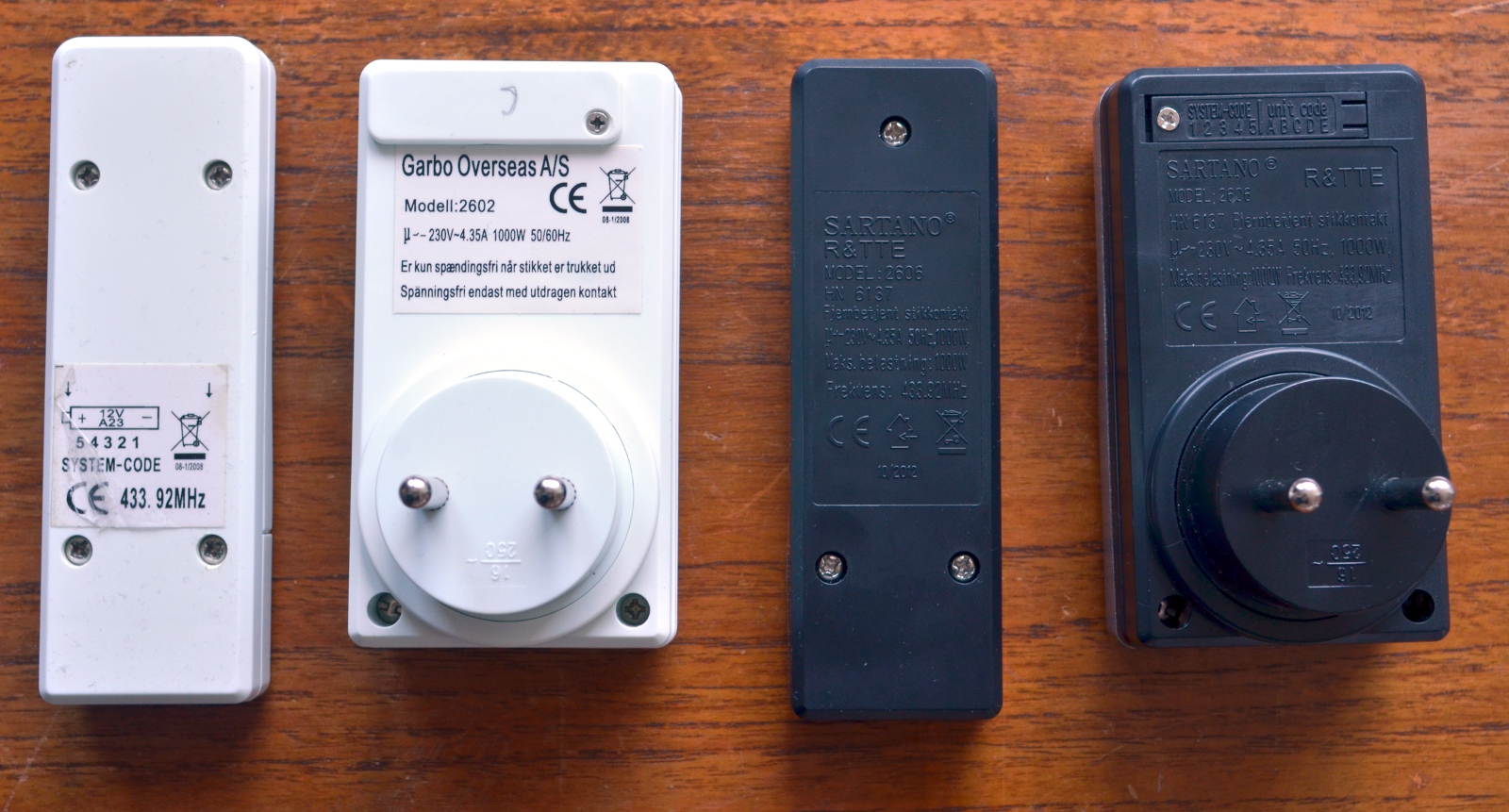 I have two remotes and six power switches in total now and they all work great together. There is no problem controlling the white switches with the black remote or opposite.

Inside the remote controls 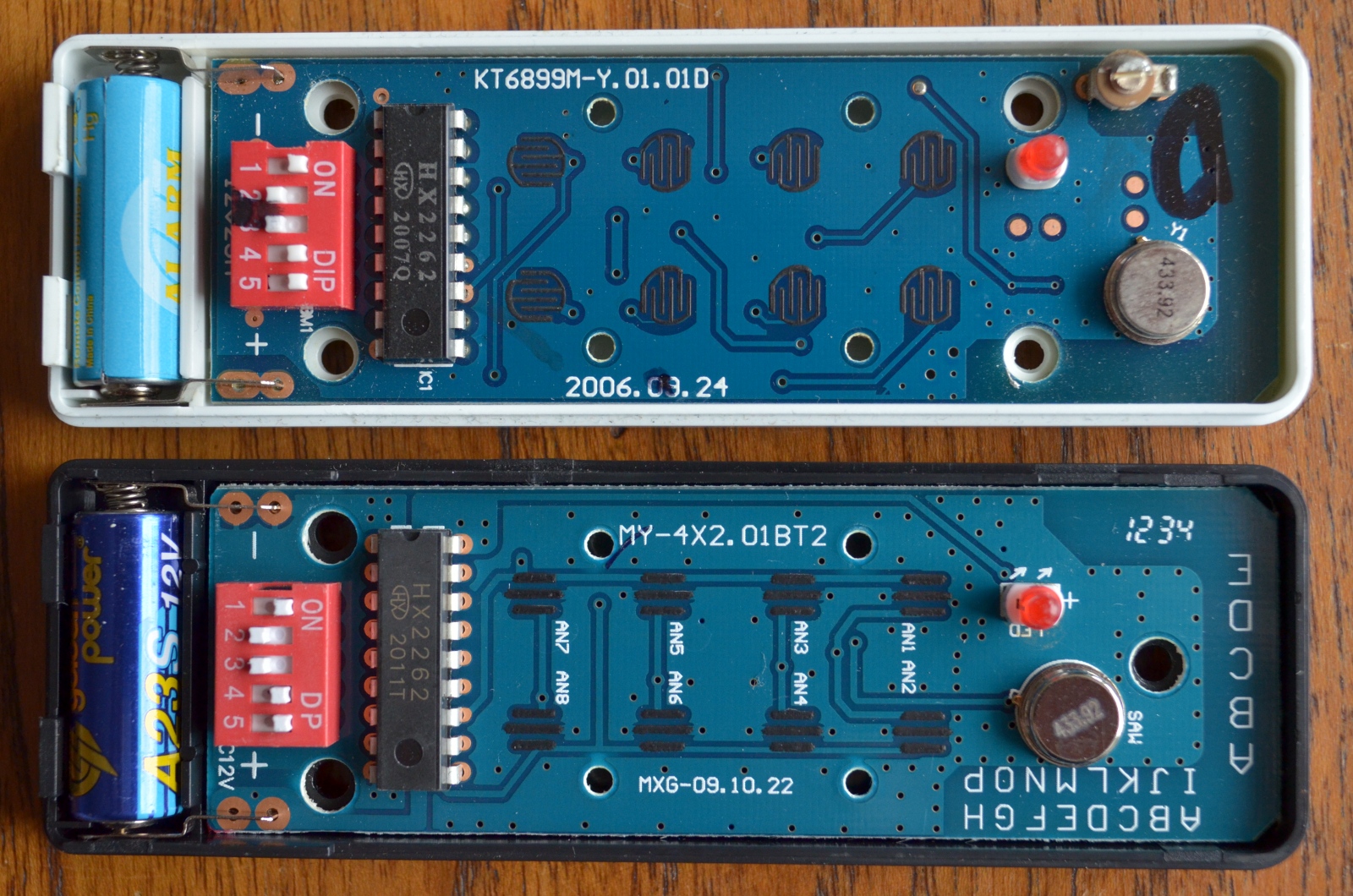 The 5 DIP switches set the “system code”, which must be set to the same in the remote and the power switches to be controlled. Notice how the white and black versions differ in the key panel implementation. When a button is pushed on the black version, two signals are shorted to ground. It is not really good practice to try and short three pads like that. It reduces reliability and it may easily happen that only two of the pads get shorted resulting in unexpected behavior.

The white version does not have this flaw and uses a bunch of diodes instead to get the same result of pulling two signals to ground when pushing a button. The two signals simply selects the A, B, C or D channel and either ON or OFF action. Diode networks in both remote controls pull down a third signal also, the /TE transmit enable signal which starts RF transmission.

A 12V alkaline battery, a HX2262 IC and some RF circuitry is also present in the remotes.

Inside the power switches

The power switches were protected by tamper proof screws: 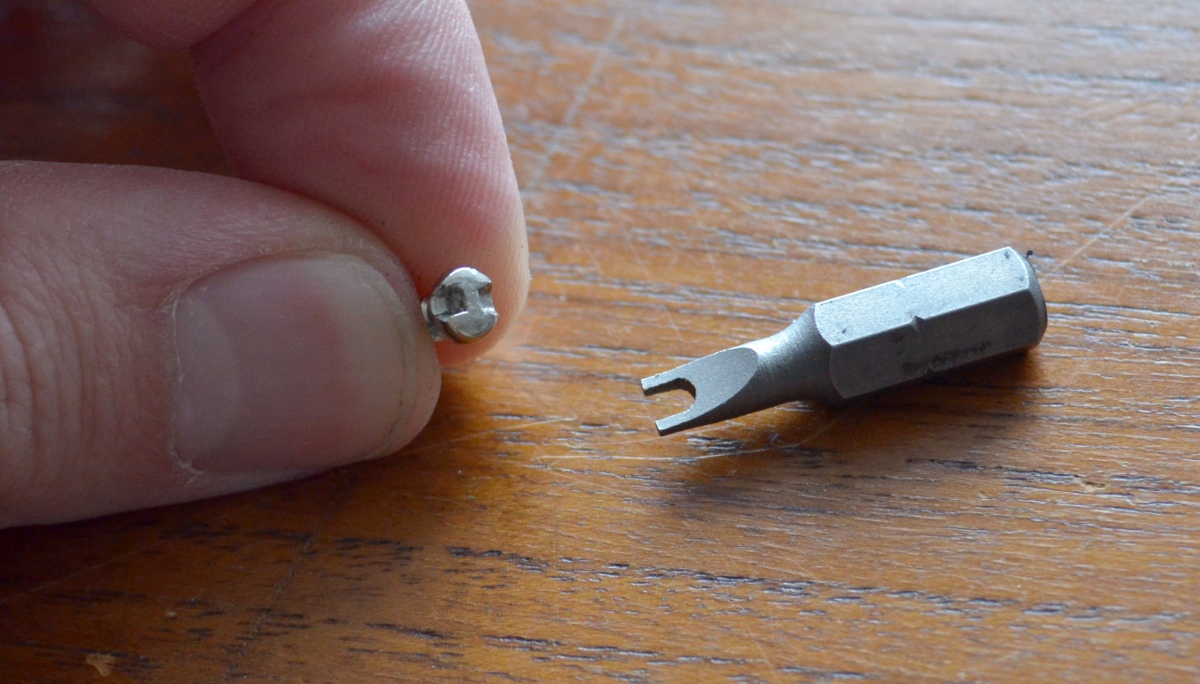 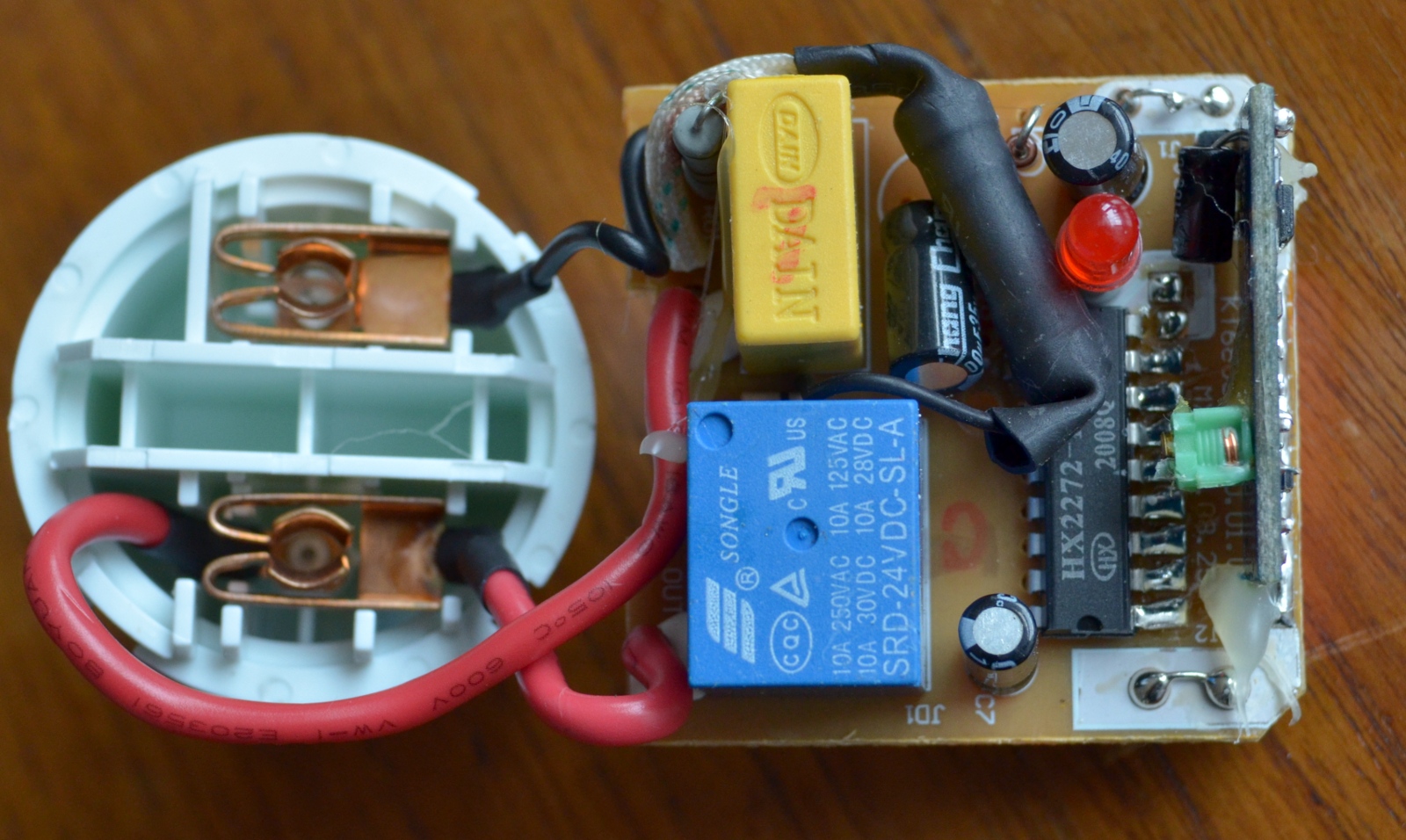 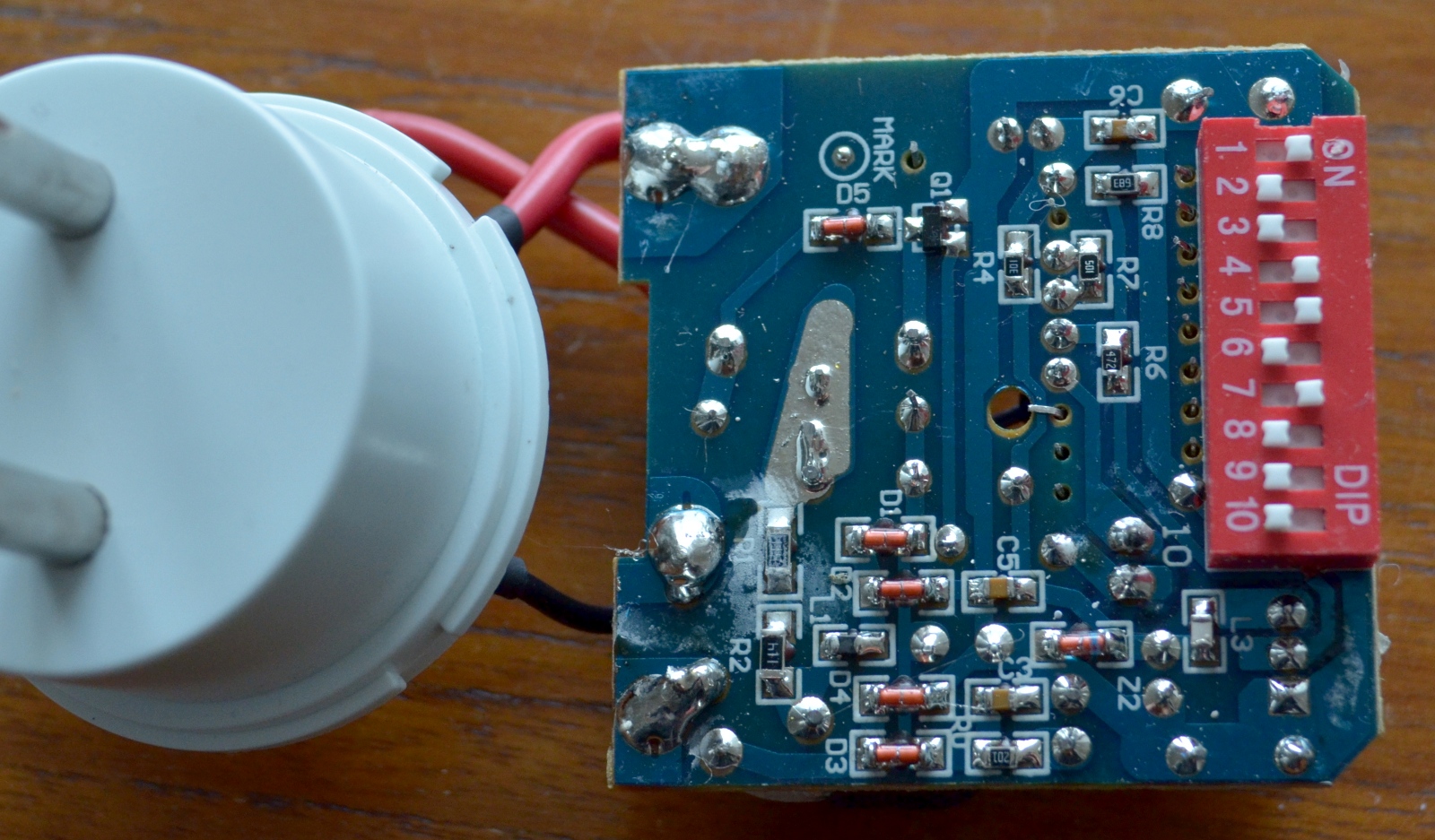 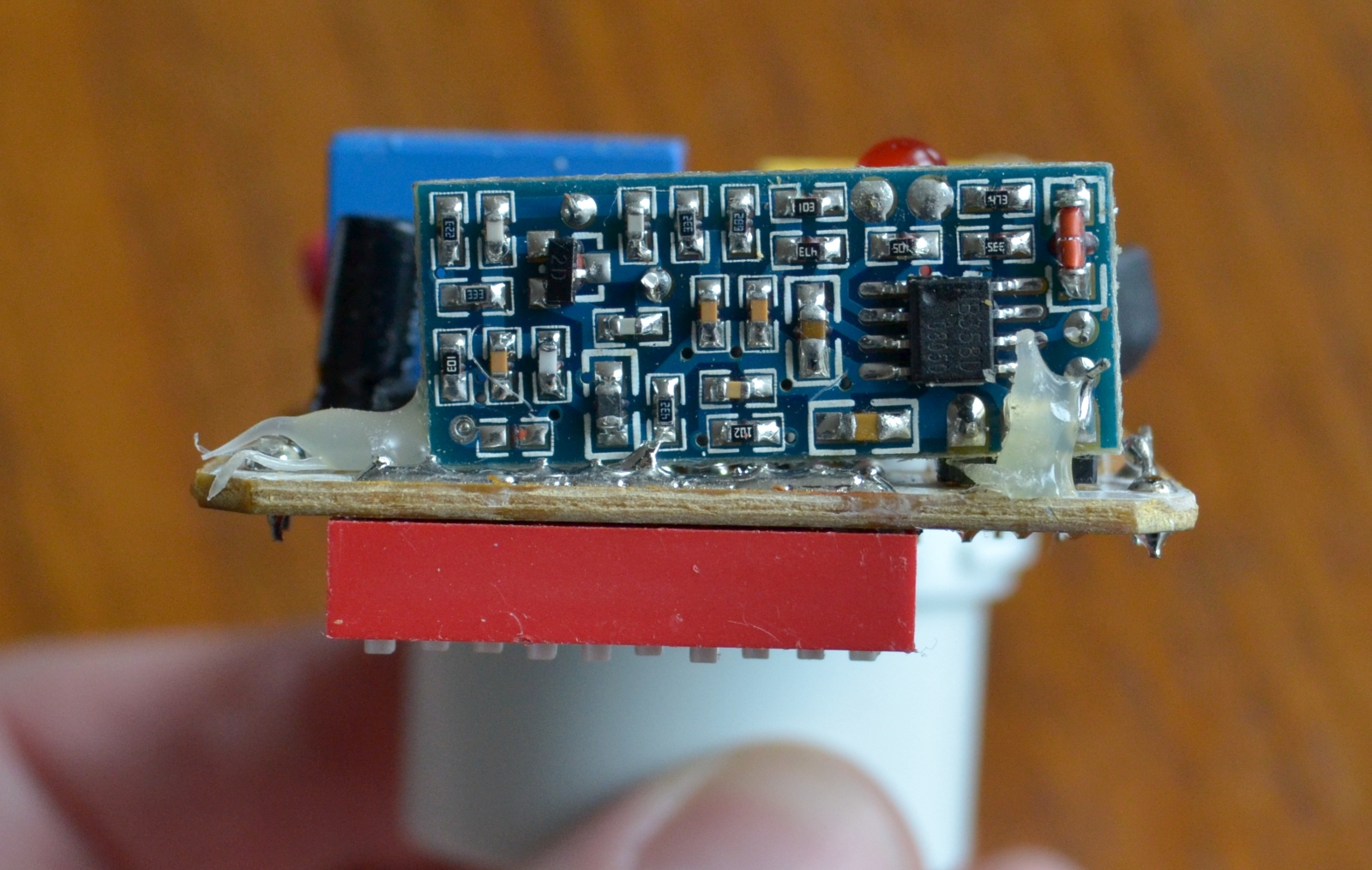 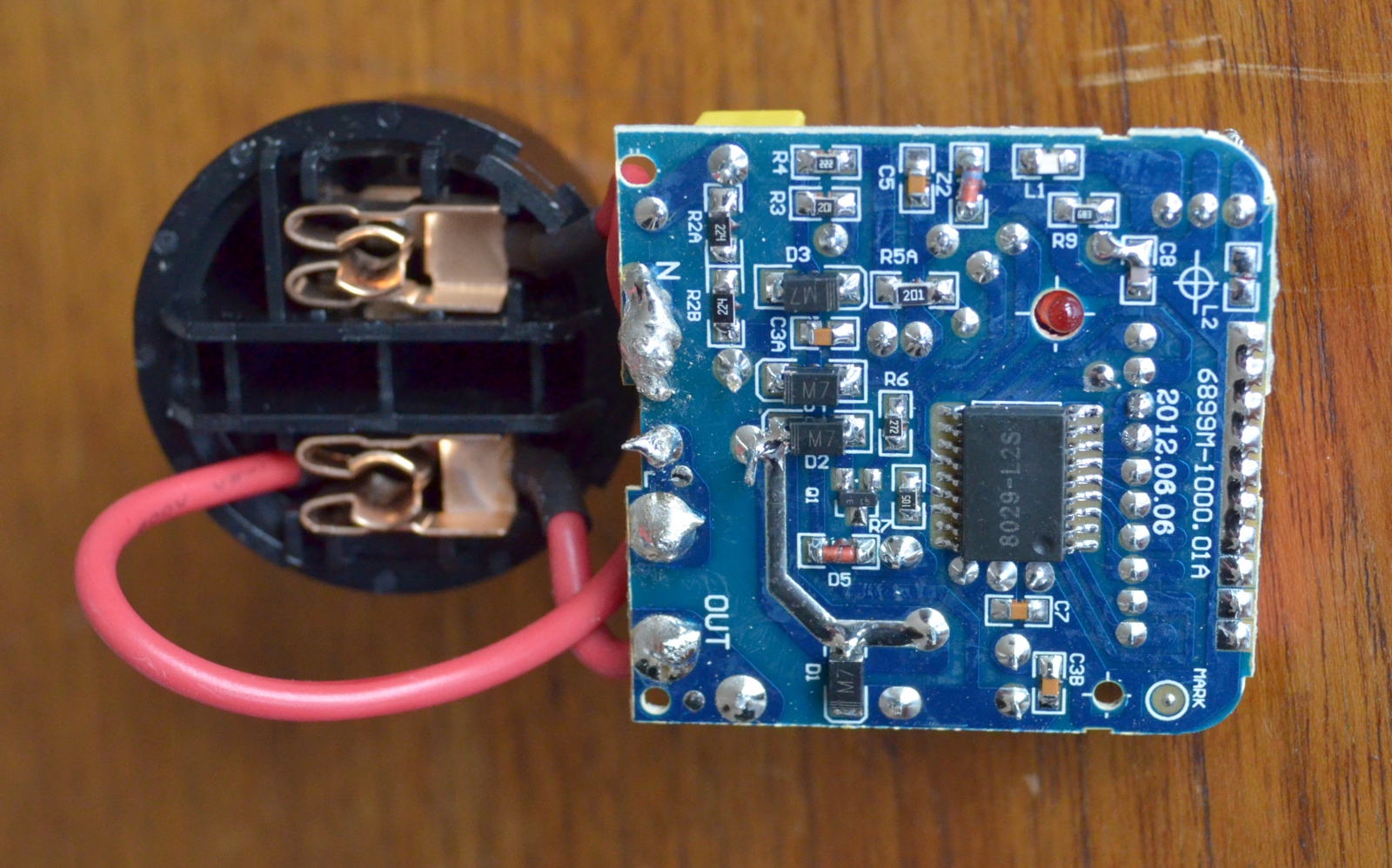 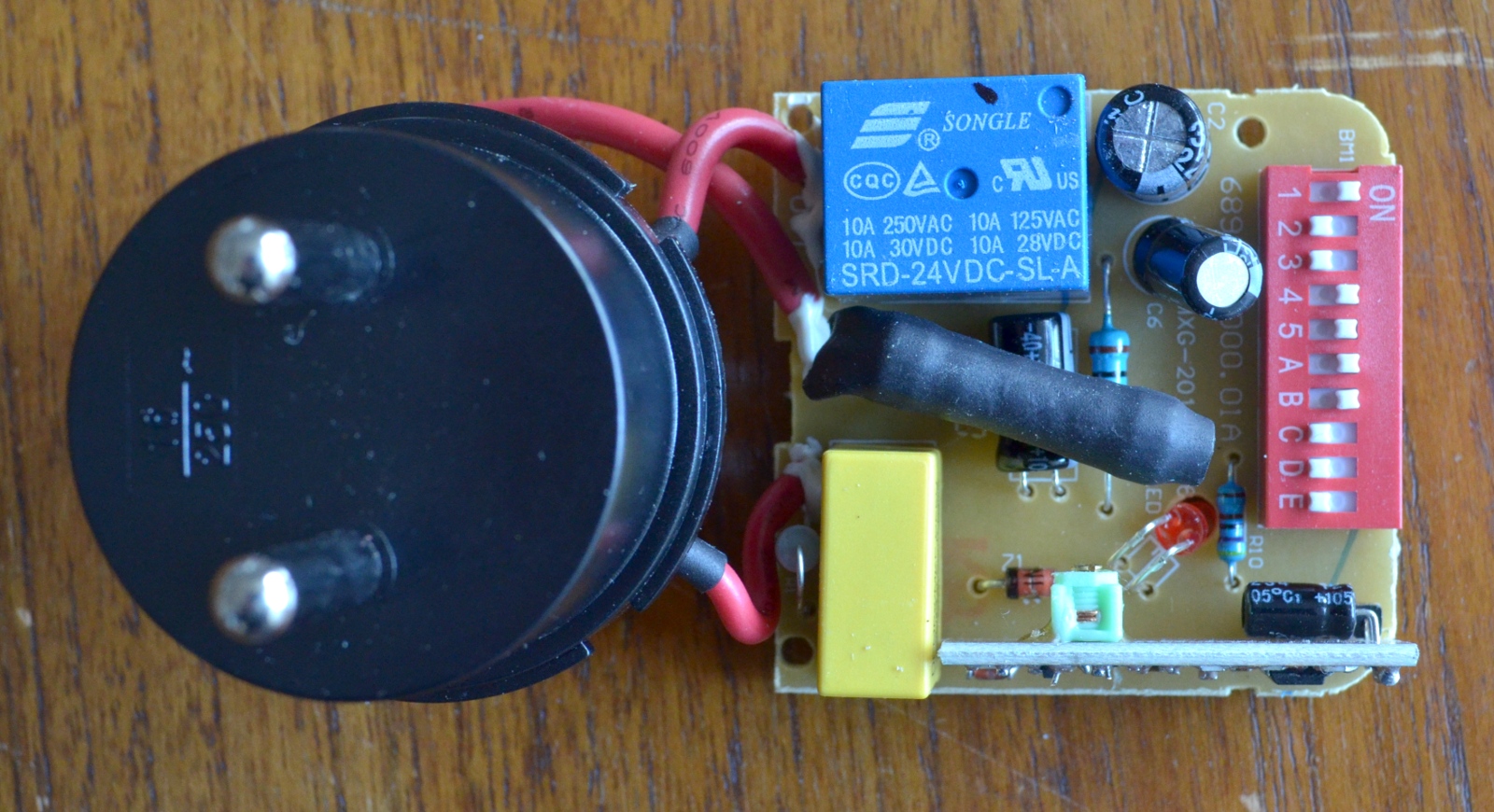 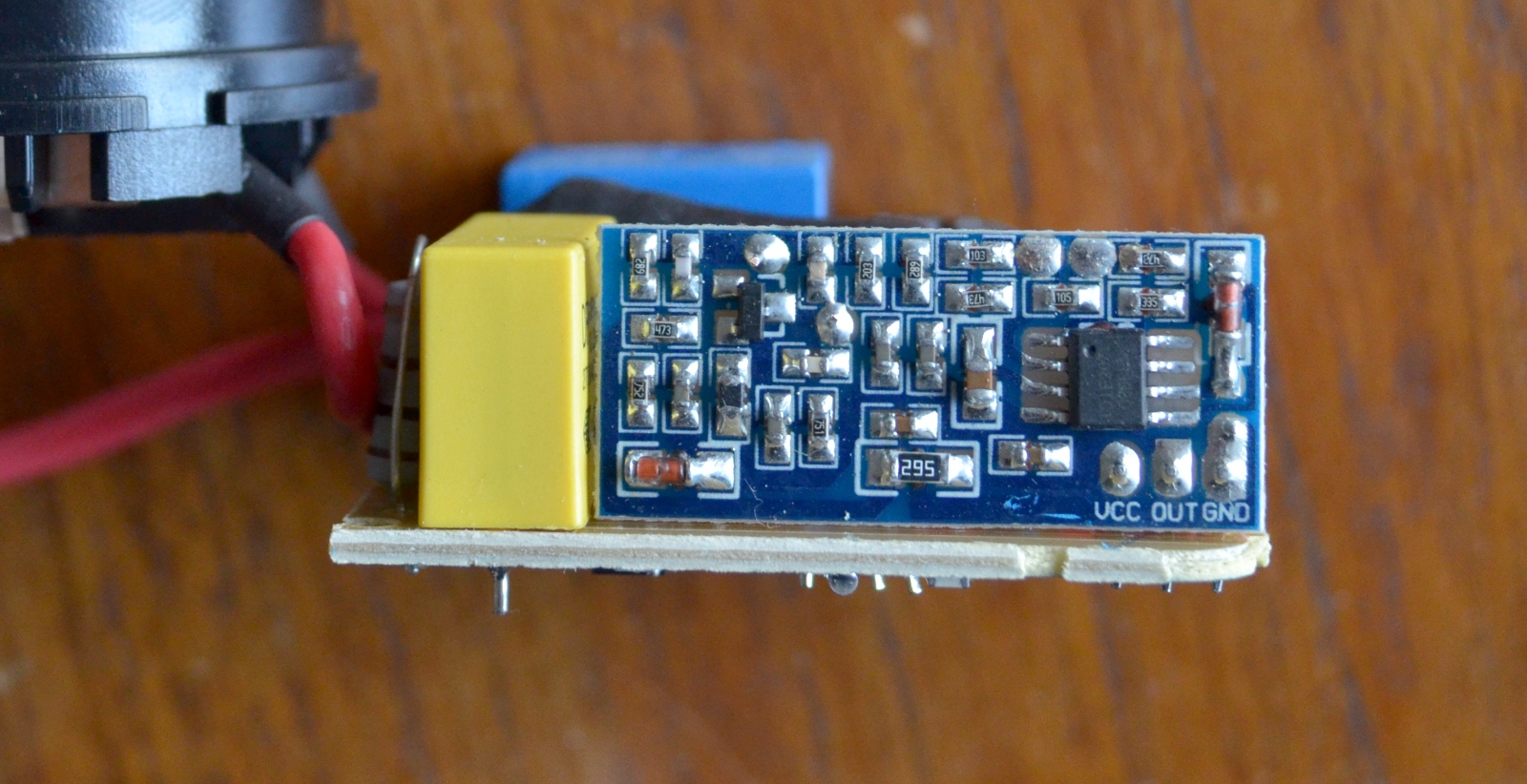 Notice that the high voltage relays are rated 10A, 250VAC in both models, even though the power switches are rated for handling 1000 W maximum on the package. Drawing 10A in a 230VAC country would mean a power draw of 2300 W, well beyond that value. The conservative limit is probably due to heat dissipation problems going above 1000 W for longer periods of time.

The basic usage of the system involves setting a 5 bit system code common to both remote control and power switches on DIP 1, 2, 3, 4 and 5. The power switches are also configured for A, B, C or D by setting an extra DIP to ON.

The way this is implemented is very simple. The HX2262 IC simply encodes 12-bits into some sort of a package suitable for RF transmission. The 12-bits holds the system code, switch channel and the desired ON or OFF action in the following way:

The power switches listen to messages that match their configuration and act according to the ON and OFF bits. Notice that the system has room for an E channel also, even though there are no “E” buttons on the remote!

I can confirm that the mysterious extra channel actually works. I configured a power switch for channel E and shorted pin 11 on the HX2262 IC to GND in a remote. The pin was simply N/C. Furthermore I shorted the ON bit and /TE signal to GND and voila: the switch turned on!

Another configuration trick is to configure a power switch for more than one channel: A and B for instance. Now the power switch will react if you push A and B simultaneously on the remote.

In conclusion, I must say that this remote control system is cheap and effective. I have been using the white set for years without problems and the remote control battery is not even drained yet. The range is in the order of 20 meters depending on obstacles. The only observation is that the power switches seem to get a tiny bit warm when they are just connected independent on ON or OFF state. Not a lot, but enough to make the enclosure feel slightly warm to the touch. This indicates that the electronics waste a bit of power.

The black/silver remote suddenly died… I didn’t get to use it more than about 20 times and the battery is fine, pretty disappointing. I decided to take an in depth look at the working remote and compare it with the dead one. The conclusion was that the HX2262 IC has simply given up but the rest of the electronics seems to work in the remote.

I got some oscilloscope screen shots of the signals and investigated how the HX2262 encodes it’s transmissions:

The HX2262 seems to be closely related to PT2262 which has the same pin out and according to the data sheet is suitable for encoding data for RF and IR remote controls.

When /TE (transmit enable) is pulled low, the HX2262 starts pulsing on DOUT (PIN 17). The transmissions are 32 ms long bursts followed by a 10 ms pause, repeated again and again, as long as /TE is pulled low: 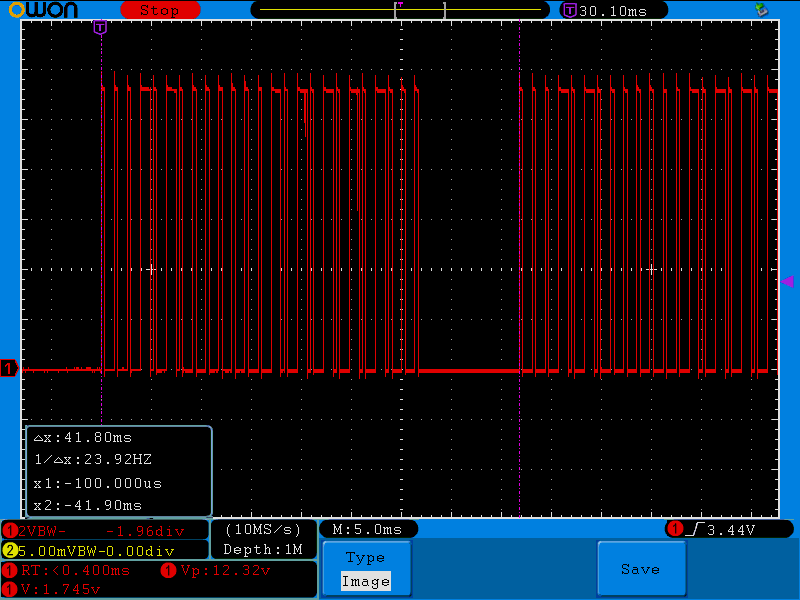 Each burst consists of 25 pulses. They can be either short or long: 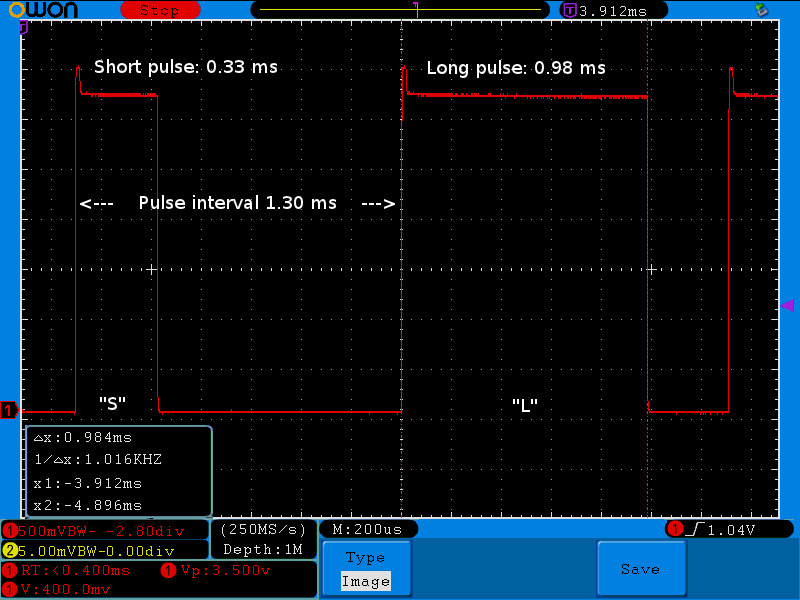 The oscillator circuit of the HX2262 use a simple RC principle with the resistor placed between PIN15 and PIN16. This is a probe of PIN15: 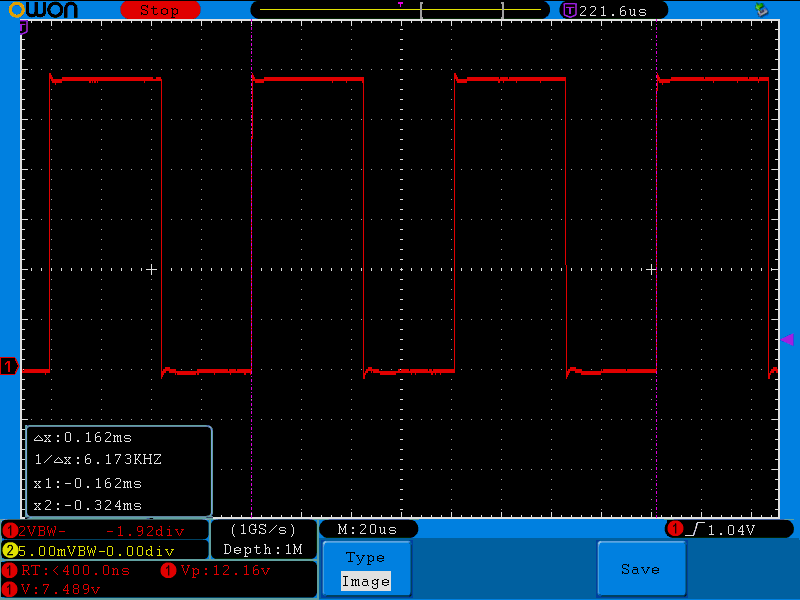 The oscillation has a frequency of about 12.3 kHz. The duration of four beats: 0.324 ms seems to be the fundamental time unit used to generate the pulses:

So, what does the pulses encode? I recorded the length of the pulses in a transmission using “L” for long and “S” for short:

It seems the pulses encode the 12 bits of data on the HX2262 inputs using a pretty simple scheme. Two short pulses encode bit:1, one short and a one long encode bit:0, if bit:1 is regarded as pulling an HX2262 input low. After twelve bits, the transmission ends with an extra short pulse. Or it may be the very first pulse that is an extra syncronization pulse. In any case, the transmission can be decoded to:

– which fits with what I was doing on the remote: A, ON.

It should be noted that I often observed different telegrams in some of the first or last transmissions during a press of a button. I don’t think this has anything to do with a key-down and key-up encoding scheme. I think it may be because the button press doesn’t short with a low enough resistance in the beginning and doesn’t adequately pull down the channel or ON/OFF bits before /TE is pulled down and HX2262 starts generating telegrams.

I measured the power consumption of the power switches to about approximately 5 watts regardless of it being ON or OFF… Hmm… Pretty power hungry after all.

The actual standby power consumption is fortunately not 5 watts, but closer to 1 watt. The 5 watt measurement was done with a simple consumer watt measuring device. Using proper measuring equipment, I got a value of about 1 watt and a really bad power factor. The 1 watt also seems more correct considering the amount of heat generated.

Thanks for a fine article.

Quite a number of the sockets went bad after some use, (one or two were dysfunctional straight from the package) some more quickly than others, but the cheap price taken into account; 100 Dkr. for the 3+1 that didn’t matter; I’d just replace them. Some went completely dead, others had periodic malfunctions, or a multiple seconds delayed response to the remote signal.

They were usually not being used for not more than (combined) 300 watts worth of light bulbs, the old traditional kind as well as the newer incandescent bulbs.

I think twice I experimented with substantial higher loads; > 1000 watts and at two occasions the sockets failed, either immediately or after a while; don’t remember.

I don’t remember any of the remotes ever failing.

But it seems that Harald Nyborg has STOPPED SELLING the REMOTES now, though still selling the sockets.

I was informed by a shop assistant in Harald Nyborg that they had stopped selling the remotes (remote + 3 sockets packages).

If anybody knows where else remotes for this system can still be purchased, I’d be interested in learning about it.

I still use the on a daily basis many times a day. Apart from the occasional failure of a socket it works pretty perfect.

Again realizing the very high 5 watts standby power consumption lessens my enthusiasm a bit though. Are there any alternatives without having to spend a fortune?

Let me correct one thing in the article. The 5 watt standby consumption is misleading, fortunately, the actual value is closer to 1 watt. The original measurement was done using a cheap consumer watt-meter. With proper measuring equipment I got a reading of about 1 watt and a ridiculously bad power factor (which must have thrown the cheap meter off). The bad power factor shouldn’t be a problem, so, no need to worry (that much) about power waste!

Regarding alternatives to the Harald Nyborg model, I guess you can find many cheap chinese switches with a simple ebay search. Some of them seem to be very similar and might even be compatible.

But I would also be interested in hearing about alternatives!

Just found out that Harald Nyborg is selling the remotes seperately now, and so far only via Internet. So the info I got from the shop assistant was incorrect.